This Is Title Text 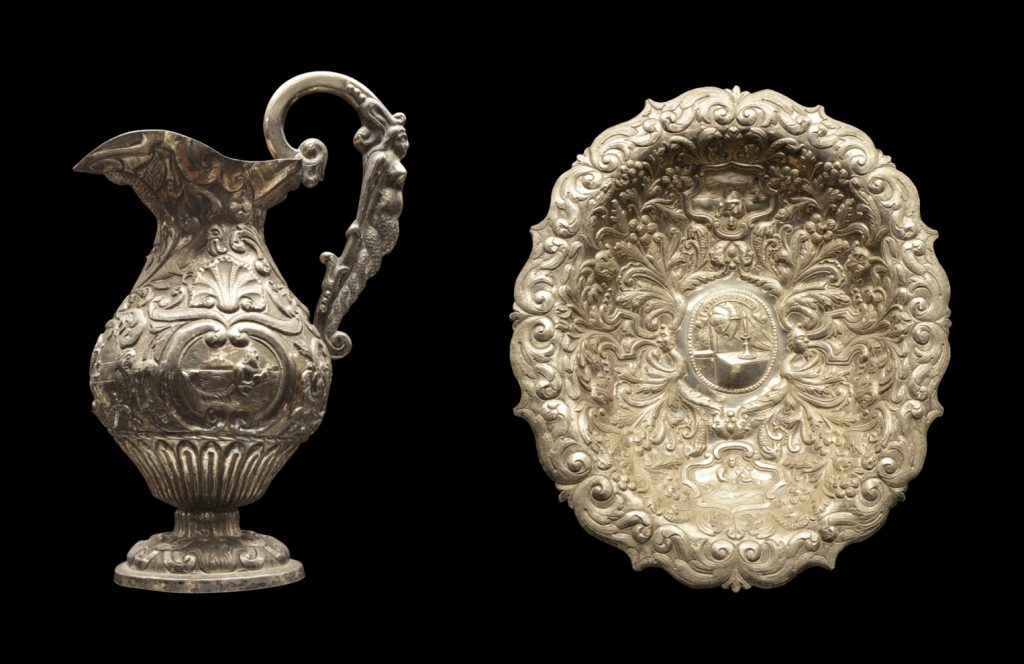 This set of pieces presents a big exoticism and decorative density and the type of ornamentation employed indicate civil use.

The ewer (MAS O4), of circular shape and plain edge, is decorated with foliage and scrolls. The small stem and the lower part of the belly are decorated with acanthus leaves and raised lines. The belly presents three cartouches: in one of them there’s the representation of a mermaid playing the violin, in the other a triton plays the viola and in the third one, one can see the inscription “VT POTIAR PATIOR” and a butterfly flying towards the light of a candle placed on a table. This cartouche is framed by four masks and two tritons. The decoration is complemented by fantastic beast, serpents emerging from flowers, tulips, acanthus leaves, scrolls and palm fronds under the beak of an eagle with big open wings. The handle of the ewer, S-shaped, is in the form of a mermaid with a twisted tail.

The laver is oval and has an edge outlined by acanthus leaves that end in scrolls. In the middle of the laver, there’s a cartouche with a mermaid emerging from the water and playing the violin which faces an identical one represented on the opposite side. Between the representation of these two mermaids, at the centre, one can see the inscription “VT POTIAR PATIOR”, which is over the representation of a butterfly flying towards the light of a candle placed on a table. The decoration is complemented by serpents and other animals, tulips, acanthus leaves, flowers and masks.

Maria José Goulão suggests that they are probably works of Hispano-American production, which, by the ornamental repertoire and by the techniques employed, have similarities with works from Upper Peru and Bolivia.  According to Cristina Esteras Martín, they suggest 19th-century Baroque revival.